Listening again to the Local Honey’s! 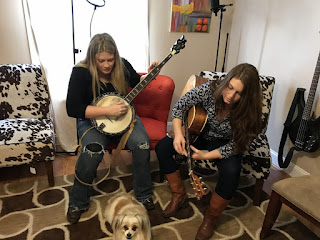 All pictures taken by Carolyn Burnette at Sound of Lexington, LLC studio

In one of their videos, “The Junkman,” the Local Honeys are a bit off track—certainly not from being Honeys—but from being—well—exactly local.  They are—as Linda Jean Stokley declares, “in Tennessee or Virginia.”  They “don’t really know.”  As the two of them sit with their instruments in their sun glazed car, Stokley introduces the video with what obviously occurs to the two of them as a somewhat unnatural “howdy!”  To this both Honeys immediately crack up, filling the car with an electric and giddy energy.  One can easily envy the carefree and youthful spirit that exudes from their joyful and beautiful—eyes.  But then something amazing happens.  The Local Honeys—Linda Jean Stokley and S. Montana Hobbs—begin to play and sing “The Junkman” (a tongue-in-cheek tune originally written by Don Rogers.)

Almost immediately there is the sassy and lifting twang of Linda Jean Stokley which, at first take, certainly seems adequately matched to Rogers’ lyrical couching of hard times, that is, as this process is accompanied by the giddiness which exudes from Stokley’s eyes.  (As it turns out, upon a thorough examination of her performances, Stokley’s voice maintains that level of twang throughout any song she sings—it’s purely natural—as she says, she “learned to sing before she learned to talk!”)  Meanwhile, S. Montana Hobbs, who, from the passenger seat, has been strumming her banjo in unison to Stokley’s guitar, vocally joins in, so that the video’s audience samples a wondrous and sudden fusion of their voices.  Like the voices of Local ‘Angels’—the harmonic resonance of those two.  And as one can see from the seriocomic realism of the song they choose (Rogers’ “The Junkman)—as accompanied, here, by the abundance of their giddy resolves–just a touch of the Devil.

Perhaps that’s what entitles two girls to act like men—note their first full album, “Little Girls Actin’ Like Men”—and not only to act like men but, in fact, to become the first females to graduate from Morehead State University with Bachelor of Arts degrees in traditional “Hillbilly” music.  And then to begin to tour internationally, like two male “partners in crime.”  Although, obviously, there is nothing viscerally manly about The Local Honeys.  (Stokley says, “The (album’s) phrase just seems to fit us to a T—we run with the boys with a womanly poise.”)  Yet if pressed to conjure what is possibly “manly” about them, I would say it’s their seamless post-nineties dedications toward their professions—i.e. the serious, aesthetic undertaking which they have more than taken full responsibility toward—supplanting standardized feminine “negative capability” towards others with a “negative capability” towards the accomplishment of their art form with an “ah shucks” self-assurance and standard non-chalance.  They are, by a quite authentic measure, the sole proprietors of their brand of that art form—that is, toward the cultural preservation and feminine creation of music that is considered Hillbilly and traditional.  That vein of music, that vernacular, in their capable and studied hands, becomes iconic and sublime.

In introducing “Freight Train Blues” on Red Barn Radio, Linda Jean Stokley expresses her admiration of one of the song’s former singers, Cynthia Mae Carver (stage-nom “Cousin Emmy”).  Stokley reports that Cousin Emmy was one of their “favorites” to listen to—as, at Morehead—the two ‘Honeys’ were assiduously studying historical musical tracts in the “archives of (Morehead’s) Kentucky Center for Traditional Music.”  Cousin Emmy (now deceased) was the early 20th century banjo-playing singer who became a female pioneer in the country music industry.  Stokley notes in her introduction that Cousin Emmy played a varied assortment of instruments and goes on to describe her as “sassy and fun and quirky and amazingly talented”  These are, in fact, qualities that if the Local Honeys don’t readily exude, they, at least, have totally down within their subtle stage mannerisms.  One can certainly witness these same qualities alive and kicking in The Local Honeys’ “The Junkman” video, as well as—to varying degrees—in their other videos (and stage appearances).  Perhaps this sassiness, fun, and quirkiness is what makes their fused talents so . . . well . . .  palatable.  So . . .  amazing!  Their musical tact is tres informed, tres . . . polished.  It flares up with a tenacity; edifies within its tombstone efficacies; in its precise rhythms and effulgent Kentucky-ness; in its learnedness and sheer authenticity; its substance and style; with its Beauty being Truth; Truth, Beauty.

They are a thing to Behold.  To be respected and revered. Their sound—the “sweet sound of . . . bluegrass kissing the mountains,” is as preserved and antique as it is vibrant and full of its own celerity. The iconic image of the two (on the Home page of their website) is of S. Montana Hobbs with her “two finger and over the hand” banjo and Linda Jean Stokley with her violin, yet, like Cousin Emmy, each of them play a variety of instruments. They, for some time now, have possessed a nuanced clarity of what came before them. (Thus they possess a similar nuanced clarity of what lies beyond them)!  With their sober demeanor—though (as reported) sometimes giddy—sometimes serious—and typically seething a bit under their smiling countenances with lyrics which contain subjects of feminism (“The Beattyville Bomber,”  “Hares on the Mountain”); corporate abuse (“Cigarette Trees); and squalid, full-out abandoned eras (“The L & N Don’t Stop Here Anymore”)—The Local Honeys communicate through images and tales whose seriocomic tones and modems most often and most generally imbue Kentucky past and present).  The Honeys are, of course, home-grown.  Hobbs is from Eastern Kentucky (Lee County) and Stokley is from Central Kentucky (Woodford County).  Stokley is a conglomeration of every beautiful down-home Southern brunette starlet you’ve ever seen—June Carter, Loretta Lynn, and Wanda Jackson come to mind—and S. Montana Hobbs looks like she belongs beside a virtuous Bibi Anderson or Liv Ulmann in an Ingmar Bergman film (or she is the planted Swedish female double-agent in the new James Bond movie)—I can’t decide which.

Each seems as musically versatile and talented as the other—the two have a natural sort of “anything you can do I can do better” rivalry.

Theirs, also, is almost a religious quest as the two have “dedicated themselves to the presentation of old music and the creation of new music.”  If not religious, this is certainly a vital and noble goal.  And when you listen to them you will know that they have accomplished what they originally set out to do.  Recipients of the Kentucky Arts Council’s 2015 and 2016 Folk Art Apprenticeship Grant, both Linda Jean Stokley and S. Montana Hobbs are teachers, who, in tandem with their Grants, taught (and still teach) fiddle and banjo to children and the young-at-heart.  They have previously toured for extensive jousts in “the Emerald Isle” of Ireland and Jamaica, received the sponsorship of Ale 8 Bottling Co., and deservedly received a letter of encouragement and admiration from the country western storyteller-legend Tom T. Hall!!

Stokley and Hobbs, like Hall, are indeed (modern) storytellers who are steeped in their element’s enduring history. In fact, they are ACTIVE perpetuators of that enduring history!  They are fine musicians with a serious edge and with a quirky undertone of ironic, sometimes-almost-bordering-on-black-humor, storytelling.  Tune into their videos on Barefoot KY TV shown below.  So support your local artists, or, in this case, your Local Honeys (though artists – scholars – they are)!  You have all Summer to see where they will be appearing around and about Kentucky.  Take a day and make a road trip out of it.  Then let the Local Honeys take you back (and a bit forward), in the tradition of kentucky music.  They are indeed a Local treasure with a golden essence.  The essence of Angels with a beautiful Kentucky twang.

Sound of Lexington sends out a lot of love for these two beautiful songstresses!  Enjoy them and share the love!

Make sure and watch and listen to The Local Honeys songs “Cigarette Trees” and “Custom-Made Woman Blues” as well as their interview with host Kevin Murphy on Barefoot KY TV at this link below!  Also scroll down below for the many pictures we’ve posted here! 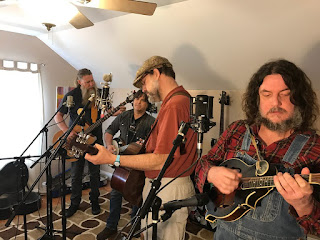 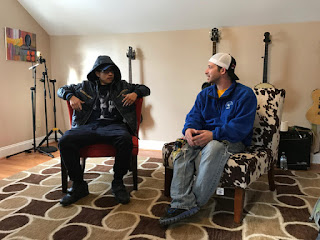